Todays guest post is written by Sullivan who was a student at my former school for three years. He'll be entering 6th grade this year and his experiences with social media are below!

Looking back at my experiences with social media in elementary school, I have great memories of my time creating a weekly podcast, being a social media intern and attending breakfast at the Martinez Rotary Club.
I was new student to John Swett in third grade. Mr. Welcome approached me with an idea to do a weekly talk show,and podcast using an app called AudioBoo, we’d call it “This Week with Sully”. One of the many benefits of this opportunity is that I was able to meet a lot of new people and make new friends. Whether they were asking me to mention something on the show, or they just thought it was cool that I got to be on a podcast with Mr. Welcome, I spoke to people I may not have had the chance to otherwise. I also really enjoyed sharing my opinions and interests, such as, sports, reading new books and movies I had seen recently.  Getting to do “This Week with Sully” helped me become more fluid with speaking, it was good practice for public speaking in and outside of the classroom and it was always fun to work with  Mr. Welcome. He and I would brainstorm and then throw together a speech. Now that I think about it, this was one of my favorite experiences in elementary school.

During the first ever student council meeting of the year another student and I were given the post of Social Media Interns. We were taught how to use Twitter, then we were given Mr. Welcome’s iPad and told to take pictures of things we saw that looked interesting. We took pictures of art projects, kids at recess, and everyday activities we thought were funny. Being a social media intern was a great experience for me because I would like to write and direct movies for a living. I thought that being a social media intern was almost like being a journalist. It also helped me learn how to use a social media platform appropriately and correctly. I believe it was like we were giving teachers ideas from other teachers, as I know that most teachers do this. We didn’t only take pictures, but we asked questions and got to participate in conversations. It was like the technology version of a school newspaper. 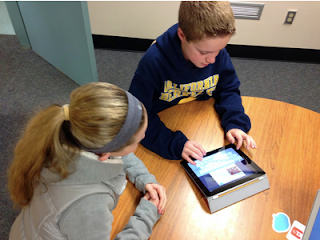 When my internship was finished I got the privilege of taking a visit to the Martinez Rotary Club for breakfast one school morning. We were asked to speak about what benefits social media has to offer in education today. We explained that we were the social media interns and how our job was to take pictures of things around the school and put them on Twitter for parents and other kids to see. The members of Rotary had many questions, but the recurring questions were mostly along the lines of “what if a student does something inappropriate through using Social Media?.” Mr. Welcome explained that there was an app used by a teacher that monitors all the computers in his or her classroom. He also explained the many positives, such as using Twitter, that can make the campus seem like it’s Open House all year.  I think they were convinced. 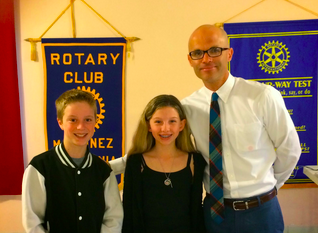 As I reflect back, I really do appreciate the experiences I was given through the exposure to and privilege of the use of social media and technology. I think that podcasts, social media, and even speaking to the rotary club only begins to describe the benefits of social media in Elementary School.