My 3 Year Old Son - So Many Questions #digitaldad

Being a dad is the absolute best, my father would often tell me the same thing when I was a little boy - I can remember him saying it often. He even reiterated it to me when I was a young adult, seeing how proud he was to be a father of three boys made becoming a father for me even that much more enticing!

I just recently wrote a blog post for the Dot Complicated website about being a Digital Dad and after our recent family trip to Europe I was reminded how important it is to be present, listen and answer the myriad of questions that come my way - first and foremost from my son Tilden. 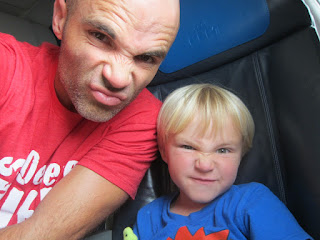 Here's what about eight minutes looks like on an Air France flight with Tilden, before takeoff.......

Tilden -
"Are we in the air yet dad?"
"When can we have a snack?"
"Are they speaking French dad?"
"What are they saying in French dad?"
"I have a blanket and my own pillow for the plane dad!"
"I heard bon jour Dad, I speak a little french!"
"When can I have a snack?"
"Can the tires on the plane go flat?"
"I see cones out there dad, can we have them?"
"Can we have a croissant when we get to France?"
"Mom said we could have chocolate croissants dad!"
"They're speaking more French dad!"

Me -
"They're giving us some details about the flight to Paris."

Worried look on his face -

Me -
"We are flying to Nice, but first we have to fly into CDG and catch another plane to Nice."

Me -
"Great question - CDG is the airport abbreviation for Paris."

"We're in San Francisco right now, what do you think the abbreviation is?"

Me -
"You'll hear the Captain talk to everyone and then we'll really feel the plane take-off, trust me!"

Tilden -
"Does the plane have a flat tire?"

While drafting this blog post the image below was shared with Principal El and it's SO true! 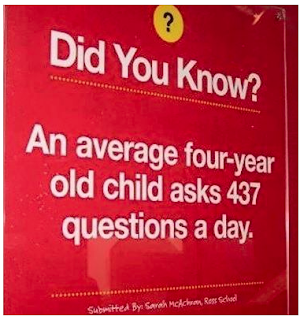 My son and daughter ask so many questions because they're curious! They're learning about our world and questions are the sonar of their brain, answering and explaining the world around them. At times it's a lot, my wife and I both agree.

But what happens if we don't answer and encourage the questions they ask? Over the years I believe they'll loose the curiosity and excitement if we're not engaging them and in turn asking/answering SO many questions.

Yes there are times when my children ask lots of questions, at times when we're super busy or have five other activities going on at the house, or we're trying to make dinner, or trying to pack up the car and head to Tahoe, or sleep on the plane flight home from France, or driving around Spain and we're lost and our phones have used all the data so Google Maps doesn't work, or the dog is barking and the cat is scratching the couch.

But our job as parents, as educators is to foster that creativity about our world so they absorb and learn and continue the excitement that's inside of them. So many questions and so many fun answers as well!