It happened again. Of course I'm use to it, but it's a bigger problem than what's really on the surface.

Yes - I'm a Director of Innovation and Technology. Yes - I use to set up Google Apps domains for Principals when I was still a teacher. Yes - I really love enhancing the curriculum in classes with laptops, tablets, coding and robots.

Spoiler alert - it's not just me. I do like computers in education and my life, but kids really do too!

Very recently I was around some teachers and I could hear their chatter about technology, iPads, their iPhones etc. To be transparent I was really only half listening but then the group addressed me directly.

One teacher said - "I know, I know - you like computers."

It was accusatory almost, like it's my fault. Like I invented laptops, iPads and the app store. Like I'm the one who started this digital revolution as a way to enhance the curriculum in school.

(Some thoughts racing through my brain)

Spoiler alert #2 - those same students probably know more about computers than I do, and that's totally ok! You don't to know everything about computers to integrate them into your classroom. You only need to facilitate the learning, exploration and discovery with kids!

Blaming, finger pointing, complaining and making excuses doesn't help. It doesn't benefit anyone, it's not encouraging, it actually takes away positive energy and only hurts the cause.

So I thought for just a second before I responded.

That interaction stayed with me the rest of the evening, and even into the next morning during my run.

Computers are all around us, like everywhere. I almost can't think of a profession where computers/phones/tablets aren't used. My cousin married a guy who owns a 10,000 acre farm in Iowa. His entire crop is digitized, all the way down to his tractors and where he plants the seeds. Because he uses satellites and past data to know where exactly he should plant so he gets the highest yield.

And he's a farmer in Iowa!

My goal is to make everyone a 'tech person' - it's the language our kids speak, we must speak their language - it's about being relevant! Their language is tech and if we don't speak that language then we're teaching an entire generation of kids in the wrong language.

Just yesterday I was reading an article from Inc magazine about coding skills and how they are so desperately needed for so many different reasons - read the article here but see some highlights below!

- Learning to code opens the door to job opportunities.

Educators must embrace computers and technology, the future of our children depends on it. 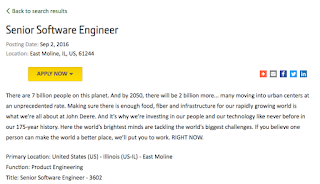 It's not about you, what you like, what you think kids should be doing (it's for sure not learning cursive) or what you think they're ready for. By the way, Kindergarten students can log into Google Apps - they can. I've seen it, I've done it, they can do it. Please don't limit kids based on your perception.

I'll say it again and I may even make a bumper sticker - I. Like. Computers.