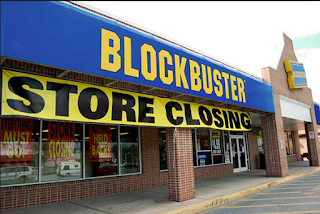 It's funny, I've thought about Blockbuster a lot during my career as an educator. When I was younger my brother and I would rent videos from their stores, but I've also used the 'Blockbuster' analogy in relation to change in education quite a bit when trying to make a point during a discussion.

Short story is that Blockbuster had a HUGE business with thousands of retail locations. A large part of their profit was based on late fees from customers. Netflix came along, didn't charge late fees, didn't have overhead with brick and mortar stores, Blockbuster failed to innovate and went out of business.

Of course schools can't go out of business like Blockbuster, but they can get to a place where they aren't moving forward anymore. I've seen it time and again, there will be pockets of learning and innovation, and pockets of stagnation.

The conversation about cursive is a classic 'moving forward' example and one that I've had with so many different people over the years. From teachers, doctors, grandparents and even police officers. How much time do you spend writing with a pen or pencil during your day?

There are times during my day as a Principal that I won't write anything down on paper, it's all on my iPhone or laptop. So why do some people insist on still teaching or practicing cursive?

Would a business that only taught cursive still have a customer base in 2015? Or would Cursive Inc. be another Blockbuster?

There's a quote from the movie Patton that has always resonated with me as well.

"I don't like to pay for the same real estate twice gentlemen."

Of course the context is different, but the message is to always move forward! Just because we've always done something, or done it a certain way, does not mean we need to continue.

My dad had to learn Latin as a kid in school growing up in New York.

Would you want your child learning Latin?

I want my kids to learn how to code!